Tattle Tale is one of the books in The Amazing Amy series, featuring Brian and Mr. Turtle along with Puddles.

It is the only one of the books starring Amazing Amy which was actually adapted into a real book, a paperback by Marybeth Elliot (wrongly advertised as "Marbeth Elliot") published in 2014.

Kirk Van Wormer is listed as the illustrator, though he might be the actual ghost writer since the accredited authors are actually fictional characters. 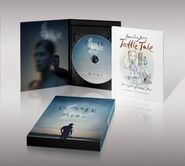 it was packaged with the blu-ray release of the film

Community content is available under CC-BY-SA unless otherwise noted.